Whether they are small watch towers, imposing fortresses or former artillery batteries, the military fortifications along the coast between the islands of La Maddalena and Palau tell the story of a not very distant past.

The Talmone battery, the fortress of Monte Altura, the Forte Arbuticci, the S. Agostino battery, the Opera I Colmi: Palau, Santo Stefano, Caprera, Spargi and the island of La Maddalena maintain a rich cultural heritage. Due to their strategic position in the Mediterranean these military buildings played an important role during the two World Wars. Often camouflaged in granite, today they offer panoramas and views of the blue of the sea between bays, beaches and brilliant emerald green stretches of coastline. We suggest at least four that you should see during your holiday in Northern Sardinia. 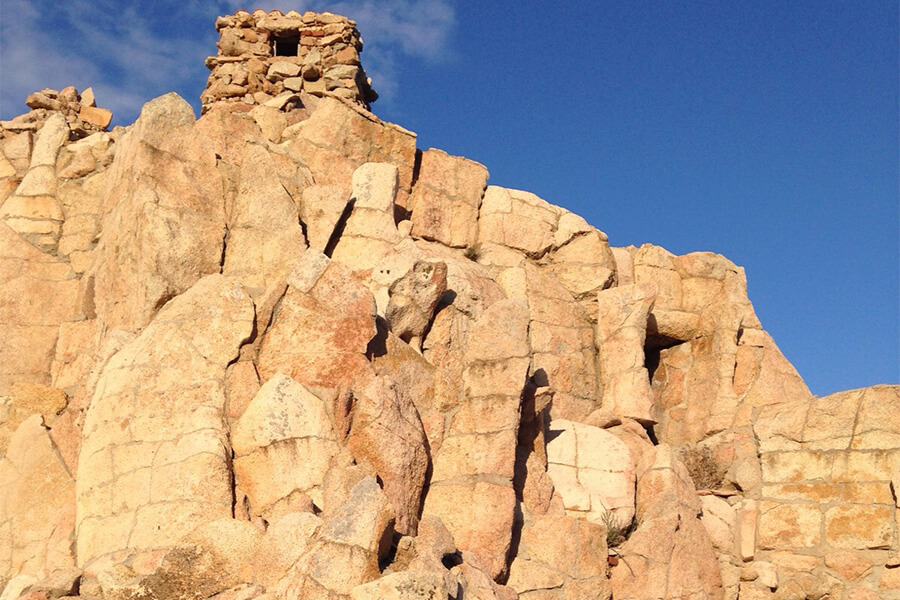 One of the most interesting viewpoints on the island, the Monte Altura Fortress in Palau is not only a historical testimony of late 19th century military architecture, but a real “work of art”. Perfectly set in the surrounding landscape thanks to the granite with which it was built (extracted from Monte Altura), certain sections are so well camouflaged in the rock as to be difficult to distinguish.

The tracks built for moving the explosives are very impressive. They run between the white walls of the fort and when in use they would reach the niches where the ammunition was loaded and then slid vertically to be transferred to the artillery placements at the top of the building.

In order to reach these placements, you walk along one of the most scenic points of the fortress: the stone staircase. Its massive structure and 171 steps remind the viewer of the famous pre-Columbian pyramids.

At the highest point of the “pyramid-fortress” the view is enough to take your breath away. The panorama stretches out over Palau and the marina, the uninhabited islands of the La Maddalena Archipelago and the green of the Mediterranean maquis. Two other military buildings in the surrounding area are hidden right in the midst of this vegetation: the Talmone Battery and the Capo d’Orso Battery, close to the famous natural monument sculpted by the wind over time that stands over 120 metres high. 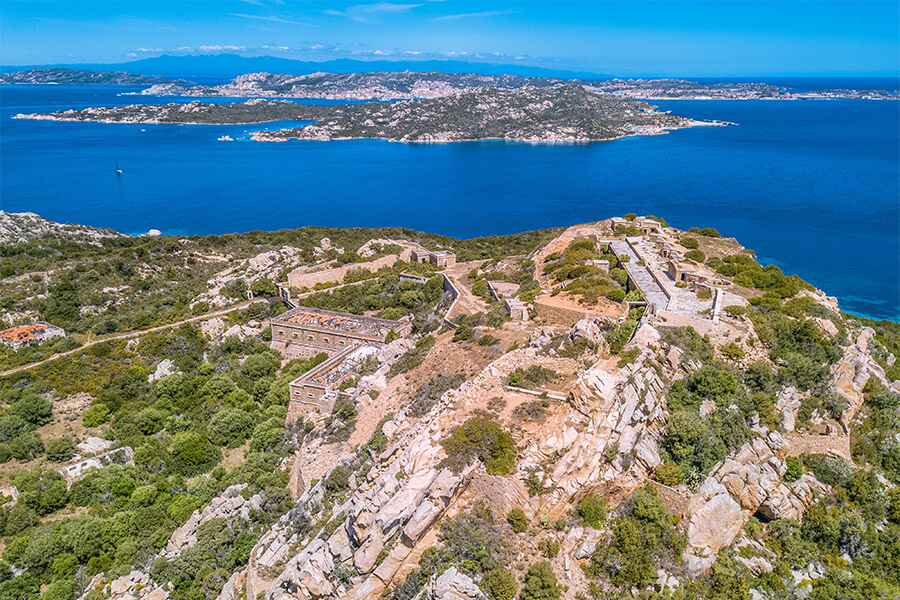 Military buildings on La Maddalena: a rendezvous with history

The archipelago’s biggest island is dotted with fortifications: Punta Tegge, Guardia Vecchia, I Colmi, Forte Santa Teresa, Forte Sant’Andrea and Forte Carlo Felice. Its strategic role in coastal defence can be seen from the military ambitions of 19th -century historical figures such as Horatio Nelson, or Napoleon Bonaparte who attempted to invade it in 1793, but was repulsed by the Sardinian fleet led by the Maddalenino Domenico Millelire.

The Guardia Vecchia was built in the second half of the 18th century at the highest point of the island by the Sardinian-Piedmontese and the Batteria I Colmi often hosts cultural events. Built between the late 1800s and early 1900s, it can be reached by taking the scenic coastal road that runs around the island and offers an enchanting view of the island of Spargi and the entire coast of Palau and Porto Rafael.

Among the most important military structures there is also La Maddalena Punta Tegge in the south-western part of the island near the beaches of Punta Tegge and Cala Francese. An imposing fortress with two retractable 149mm artillery placements, it was built between the late 1800s and early 1900s behind a large granite hill so as not to be seen from the sea. 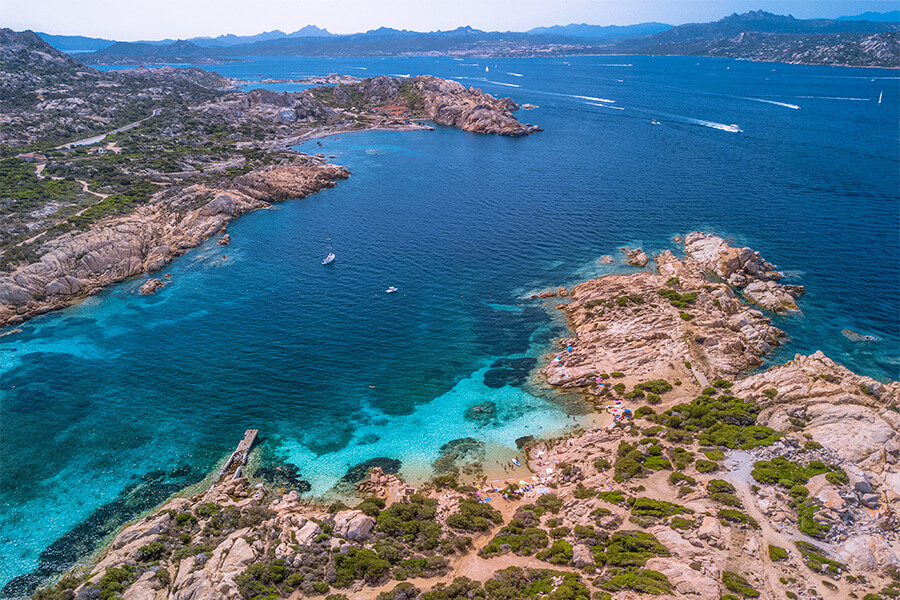 Have you ever been to Caprera? This island within the archipelago is worth a visit for many reasons: in addition to the beaches, it is possible to visit a variety of historical attractions, first of all the home of the “hero of two worlds”, the Garibaldi Compendium and the fortifications.

In fact, both 19th -century naval batteries and more modern anti-aircraft batteries were built on Caprera. To the south Punta Rossa, to the north the Arbuticci Fort and the Candeo Battery were entirely camouflaged amidst the granite and were indispensable in the early decades of the 20th century when bombing from above was the most used means of attack. It thus became necessary to carry out military works capable of camouflaging themselves in the landscape to protect the soldiers employed.

There emerged thus a “hidden city”, named after the frigate captain Antonio Candeo and armed with cannons and machine gunners around the end of the 1920s, between the 1st and 2nd World Wars. Spiral tunnels that go down to the sea, deposits, cisterns and utility rooms are the result of difficult excavation work in the hard granite rock yet they provide observation posts and shooting stations which offer glimpses and views that are difficult to forget.

If you want to combine a visit to one of these monuments with the other attractions of Palau, here are five experiences to enjoy. All different but all united by a view of unique natural landscapes. 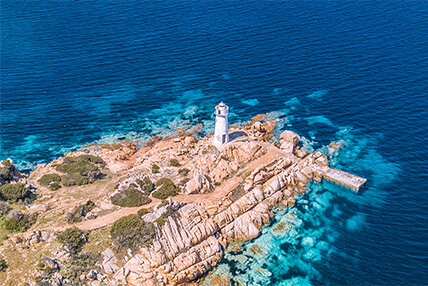 Lighthouses in the North of Sardinia: the most beautiful and where to see them 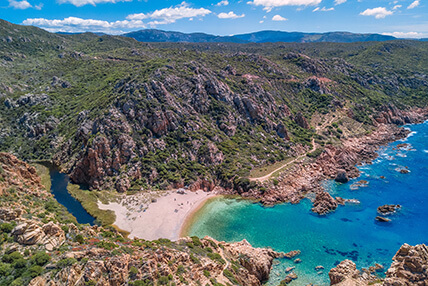 Costa Rossa by sea and by land: trips to suit all tastes 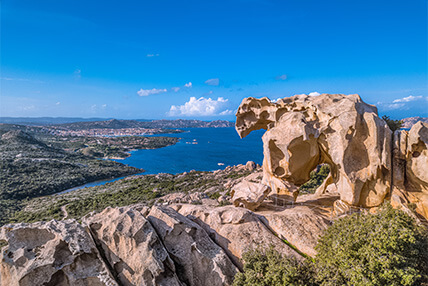